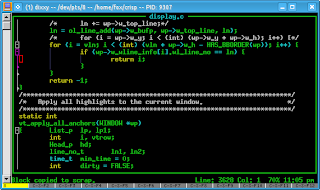 People may wander why I keep mentioning fcterm and CRiSP
when they are really waiting for dtrace. Well, consider it an
advert - dtrace is the "draw-in", but CRiSP is the product.

What is CRiSP? Its an editor. Its been my hobby horse for so
long now, that its old enough to be married, have children,
and you can find it hanging out in bars, wondering why it
didnt listen to its Daddy and get a decent job.

Its been relatively stagnant for a while - I had run out of things
to implement and support.

CRiSP is a multiplatform editor, before that was de-riguer. It
runs on Windows/Mac/Linux, and is pure C code. Its small and
tight in terms of code (by todays measuring sticks).

Fcterm - is a color terminal xterm. Started many many moons ago
when Sun brought out SunOS 3.x, and color monitors were just starting
to appear. In those days, "shelltool" and "cmdtool" and the whole
XView desktop was just too "black and white". Color xterms didnt
really exist (AIX had a nice one). So, fcterm was born. It
was small and fast.

As CPUs have gotten faster and faster, its still small and fast, but
over recent years it has had new features added (infinite scroll,
graphical drawing ability). (See prior post on "proc" using this
to effect -- http://crtags.blogspot.com/2011/08/some-illustrations-of-proc.html).

Theres a limit to how much you can add to an xterm. Or is there.

See below for a screen shot of the latest fcterm. This is character
mode crisp running inside the window, providing graphical features
(also available in the graphical version of CRiSP). I spend
most of my time in an xterm - the Ctrl-Z/fg aspect of switching from
editing to "doing" is convenient, and its worth making the terminal
emulator comfortable.

[fcterm has a butt-ugly popup window for setting attributes; on my
todo list to revamp that one day].

Look carefully at the outlining margin and the gridlines for tab
indenting.